A Japanese company is planning to mark its 350th anniversary by building the world’s tallest wooden skyscraper.

Sumitomo Forestry, a member of the gigantic four-century-old Sumitomo Group, claims that only 10% of the 350m-tall ‘W350’ will be made of steel. The rest will be constructed with 180,000 cubic metres of indigenous wood.

The press release read: “We are accelerating research and technological development in the fields of resources, materials, and building through technological development of wooden architecture for high-rise buildings. Such buildings create a comfortable environment for both plants and living organisms, providing a pleasant space for the people living there and in the surrounding city. These structures are like a forest, a habitat for living things. The number of wooden buildings in urban areas is increasing. Under this concept, greenery on the earth will contribute to buildings and cities, making over cities as forests. Buildings that are full of greenery will form a network that is linked to the biosphere of living creatures such as wild birds and insects, contributing to the biodiversity of cities.”

If you know anything about Japan, you might be asking what will stop the project from turning into the world’s largest Jenga tower the next time the country experiences an earthquake. Sumitomo Forestry claims that a “braced tube structure” using vibration-control braces will protect the structure in such an eventuality. 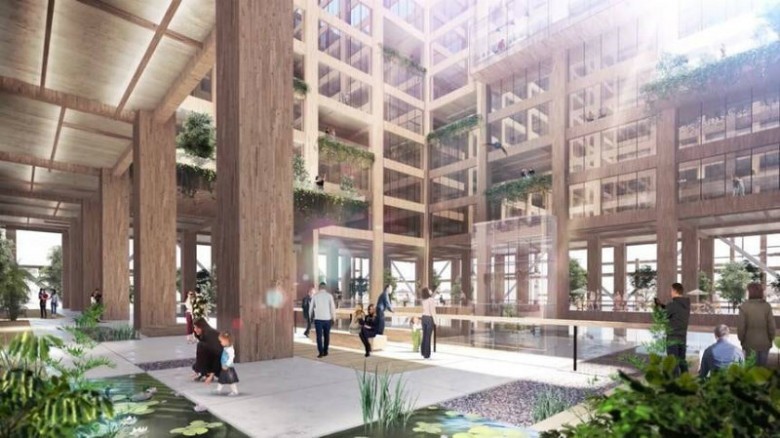 You might also be wondering about what the environmental cost would be for cutting down so many trees. While overusing timber is dangerous, wooden skyscrapers do offer some distinct advantages. Wooden buildings, unlike concrete and steel equivalents, actually absorb carbon rather than emitting it. It also helps that around two thirds of Japan’s land is covered in forest, so the construction is unlikely to cause any kind of Lorax-scenario on its own.

That said, Sumitomo Forestry did take the time to address the issue of deforestation and how the skyscraper will achieve ‘symbiosis with society’.

“The devastation of domestic forests due to insufficient maintenance is becoming a problem. Increased timber demand will promote replanting and contribute to revitalization of forestry and local community through producing seedlings to encourage sustainability of forests.”

While the project is scheduled for completion in 2041, it may not necessarily be built with the technology of today. The skyscraper has a projected cost of around £4.02bn, which the company hopes will be reduced as new technological advances become available.

On completion, the skyscraper will provide 8,000 homes, with balconies covered in trees and foliage at every level.

The title of ‘world’s tallest wooden skyscraper’ is currently held by an apartment block in Vancouver. It measures just 53m tall, around ⅙ of the height of the Shard in London.