How much does a fire sprinkler system cost? Installing a fire sprinkler in your home or workplace may seem like a rather drastic measure, but not doing so could cost your life - find out more here.

How much does a Fire Sprinkler System cost?

The average cost for a fire sprinkler system is £1517. You are likely to spend between £750 and £2300 total. Exact price may vary depending on your area and project details.

How much does a Fire Sprinkler System cost?

Get Free Quotes
The average cost for a fire sprinkler system is £1517. You are likely to spend between £750 and £2300 total. Exact price may vary depending on your area and project details.

Every day an average of two people die of fire related accidents and 44 are injured; 72% of these injuries and deaths happen at home, where you’re supposed to feel safest. Of course, having a fire alarm installed in your home provides some degree of warning and protection, but that doesn’t mean you should stop there. Fire sprinklers also provide the best fire protection available to residential homes, and if you are still unconvinced we’ve outlined some of their main benefits below:

1. They provide active fire protection:Fire alarms provide a passive version of protection – they alert you when there is a fire, but saving yourself and your family from the danger is left completely up to you. Fire extinguishers are also passive, in that whilst they can put a fire out, they need to be operated manually – and this takes up valuable escape time. However, for the cost of a fire sprinkler you can have active fire protection in your own home or business – and it’s far more cost effective than having a fire-fighter guarding your house 24/7!

2. They prevent fire damage:Fire sprinkler systems put out most fires automatically, before they can cause real damage to your property and belongings. In fact, it is estimated that when fires occur in homes with residential fire sprinklers installed, fire-related property damage is reduced by around 90% in comparison to those homes without a sprinkler system – making the cost of a system well worth the long-term investment.

3. They are activated before the fire engines arrive:Unless you live in the middle of a massively populated city, it is unlikely that the fire brigade will arrive at your house in minutes. Rural areas and traffic heavy areas alike are hard to access, and those few minutes could cost lives. However, a fire sprinkler system works with a super-rapid response rate, giving you enough time to control the fire and make your escape no matter where you live.

4. Fire sprinklers are better than smoke alarms/fire extinguishers:Fire alarms can wake you up and direct your attention to the fire, but they won’t put it out, and getting out of your blazing house safely is left to you. Fire extinguishers need to be operated by you, forcing you to stand close to the fire. Alarms need to be checked often and batteries changed and extinguishers need to be replaced. Fire sprinklers, on the contrary, will stop the fire before it causes a real threat and they rarely malfunction.It is certainly worth considering purchasing a fire sprinkler system; it will cost approximately the same as installing new carpets and could save your life. A fire sprinkler won’t run out of batteries, turn up late because of traffic, or leave you in a vulnerable position; it detects a fire and puts it out. Simple.In fact, fire sprinklers have proved so successful at minimising fire casualties and property damage, that they have been made mandatory in several counties. In 2005 the National Fire Protection Association in the US made it a legal requirement to have sprinklers installed in all new family dwellings. The Scottish Executive has also passed a new law meaning that since 2005 all new and converted care homes, high rise flats and sheltered housing must be fitted with fire sprinkler systems – so there’s no reason why you shouldn’t invest in these high-tech life-savers. 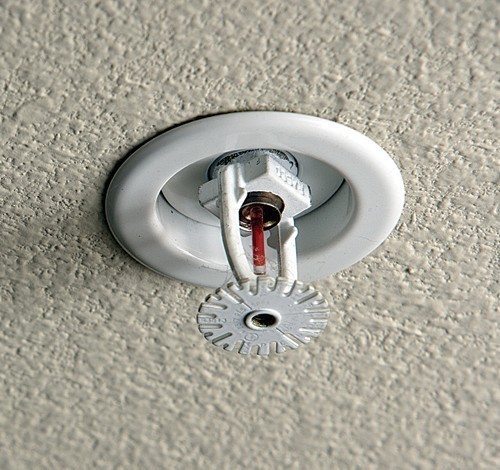 How much will it cost to install a fire sprinkler system?

The cost of a fire sprinkler system depends on a number of different factors, including the size of your home and the type of design you choose. Nevertheless, most companies generally split prices according to the three main types of sprinkler system, and we’ve sourced some average price listings to help give you an idea of how much these systems can set you back:

For more specific price tags depending on the size, make and model of your new fire sprinkler system, you should get in touch with a number of different local and national retailers and compare as many different quotes as possible.

Can I install my fire sprinkler system myself?

No, all sprinklers should be professionally designed and fitted by certified fire sprinkler installers based on British Standards BS5306: part 2 for commercial systems and BS9251:2005 for residential systems. It is a good idea to check that your chosen contractor has a quality procedure standard to 1SO9001:2000 or equivalent. You can ask for certification of installing as proof, but it is always better to check beforehand to make sure the job will be done correctly.

How long will my fire sprinkler system last for?

Fire sprinkler systems have an estimated life span of between 30 – 50 years.

How reliable are fire sprinkler systems?

There has not been one recorded death in the UK in a home that had a fire sprinkler system installed. Research into this has estimated failure at around 1 in 500,000. The biggest cause of death in fires is smoke Inhalation, and the water that is expelled by the fire sprinkler system wash larger particles of smoke away and cools it, making it far less harmful and toxic. Also, due to the fast reaction of fire sprinkler systems, they usually detect and put out a fire before the smoke becomes a real and serious threat to you and your family.