A bottle opener can be anything from a T-Rex to a luchador!

A bottle opener can be anything from a T-Rex to a luchador!

When you have a difficult job you need to play as hard as you work. Once the work day is over, you don’t want to put in any additional labour, even if this just means walking to and from the kitchen to grab a bottle opener. Instead, you want a jaw-dropping bottle opener close at hand that will leave your mates impressed for AT LEAST a few seconds!

We decided to take a look at some of the most quirky, impressive and downright startling bottle openers out there. These are our top picks for thirsty tradies!

Beer hammer: Open your beer while you DIY!

Let’s take a moment to consider the mind of whoever it was that thought: “I wish I could open a beer and put up a shelf without having to swap tools.”

While we wouldn’t advise drinking on the job, or investing in tools which swap necessary functions for novelty ones, the Barbuzzo Beer Hammer does have a few things going for it. For one, it offers two ways of opening a beer bottle, depending on whether or not you prefer a direct approach.

This particular hammer is too small for any serious work (and buyers aren’t too quick to praise the hammer head itself), so you wouldn’t want to use it on the job. That said, the hammer side is pretty useful for breaking ice apart, making it a good all-round drinking tool.

Anyone ready to get hammered? 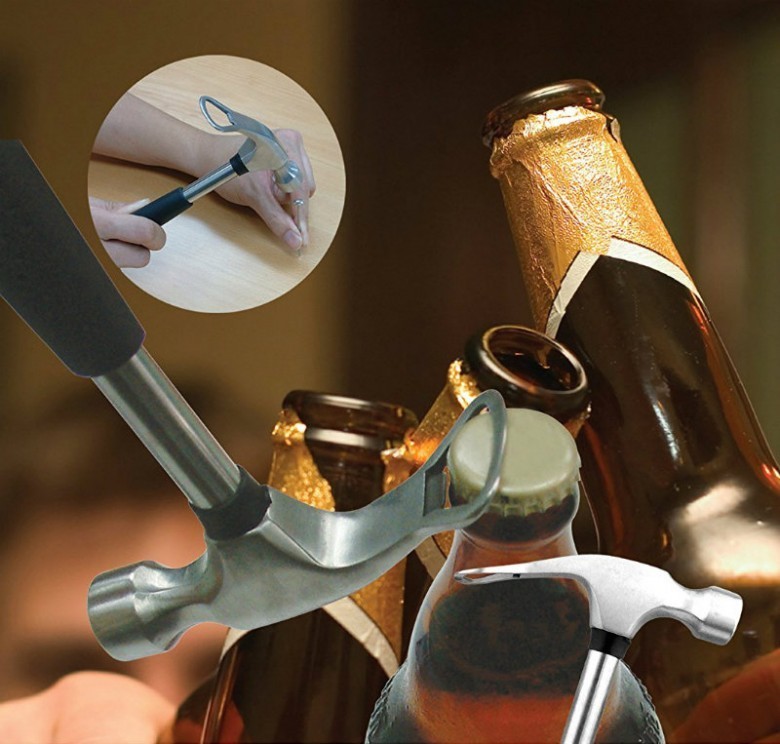 It is a well documented scientific fact that magnets make everything cooler. It doesn’t matter what you’re doing: keeping screws handy, finding wall studs, sticking your used beer cans together to make a dog, magnets just improve everything.

This is definitely the case with the niceEshop(TM) Magnetic Automatic Beer Bottle Cap Opener. You just push it down on the top of the bottle, then lift it back up to bring the cap away. It’s a simple trick, but an effective one!

The main downside we can see is that the opener is 8.5cm high, so this might not be something to carry around in your pocket (particularly a pocket with keys or loose change).

We won’t sugarcoat how much we love the fact that this opener doesn’t bend the caps that it takes off. If you’re the type who collects caps for DIY projects, or just to help you remember what you’ve been drinking, then this is definitely a tool for you! 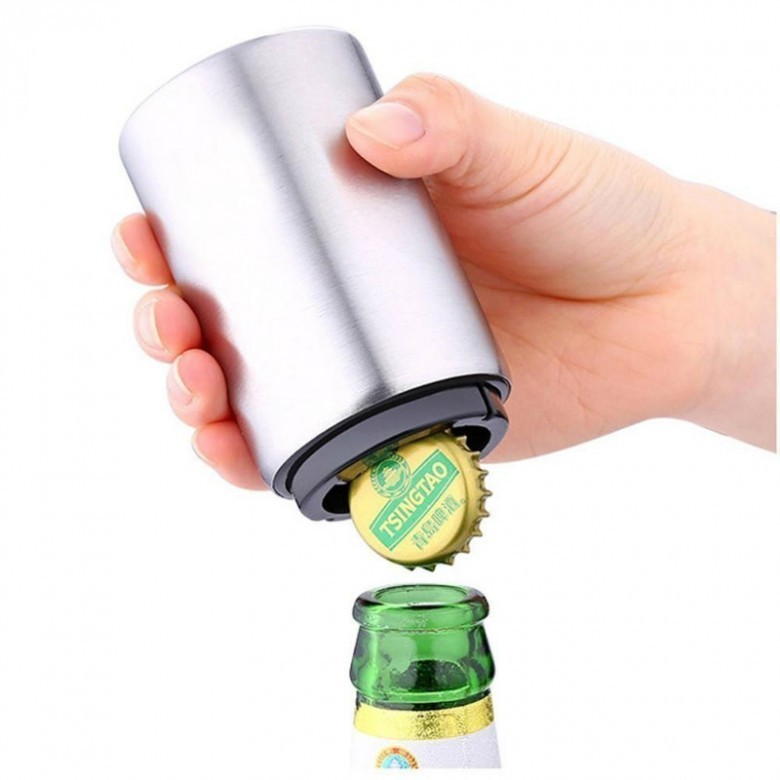 iMental Case: Open your beer with your phone!

These days, there are two things which a tradie cannot do without: a phone for keeping up to date on jobs and a bottle opener for when said jobs are over and done with. The iMental Case Sliding Stainless Steel Bottle Opener meets both of these needs in a single package!

Customers have said that the case can be heavy, but not overly-so. It is also fairly durable and scratch resistant, though it would be unlikely to protect your phone from any serious damage (no testing it with the bottle opener at the top of this list, for example).

This bottle opener would definitely be a hit with people at parties – and it would even let you check your phone without seeming antisocial! 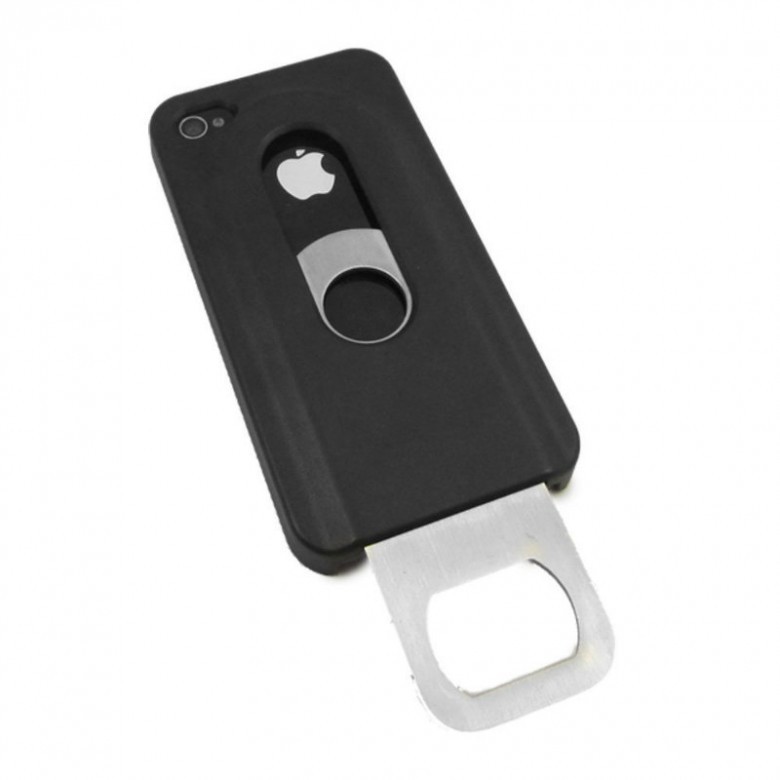 How much would you pay to be able to discreetly open a bottle of beer in any formal situation? If the answer was ‘around £28′, these bottle opener cufflinks are for you!

The advertisement reads: ‘He’ll be the envy of every guy at the party. Picture this: your guy is at a wedding, wake or party, and someone produces some bottle of the latest fine microbrew. While ordinary mortals are meekly shuffling about, looking to borrow a bottle opener, your well dressed man cracks open the brews with his cufflinks. Congratulations, for he is now the Alpha Male.’

Yeah, not like those beta-males with their buttoned-up sleeves and £2 bottle openers stuffed in their pockets. This is how winners drink!

In all seriousness, the fact that these cufflinks are made of stainless silver does give them some appeal in terms of class. If you are looking to take your novelty gifts a step up a notch, these cufflinks could be perfect for you. 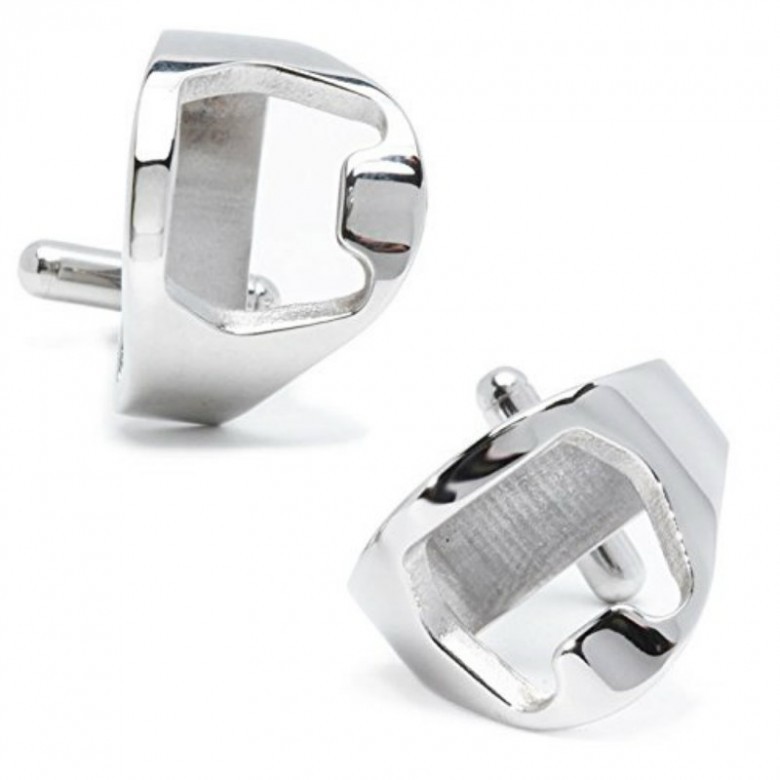 We definitely don’t disapprove of this sudden craze with hammer bottle openers. Really, you might as well go the whole mile by modelling yours on a tool used by a god who was well-known for knocking them back.

It is also worth going the full mile as far as quality is concerned. Customers of the Hammer of Thor Bottle Opener have praised its sturdiness, ease of use and the fact that it can be attached to fridges (magnets make everything cooler).

Marvel fans will love the handy case, as well as the inscription on the side. Remember, if the writing on the side starts to blur together, you are no longer worthy and should probably start drinking water for a bit. 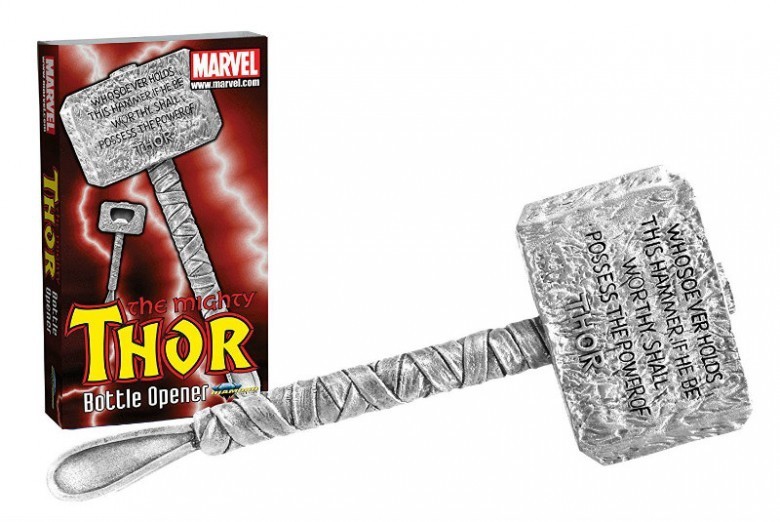 From the outset, what we love about this bottle opener isn’t the design: it’s the fact that it is made with super-sturdy cast iron. Nobody wants a flimsy plastic bottle opener which won’t even last through a single barbecue!

That said, we DEFINITELY love the design of the Dinosaur Bottle Opener. There’s just something inherently awesome about a T-Rex taking ripping off a bottle cap with its jaws.

Unfortunately, customers have said that the dino itself is not heavy enough for the opener to be used on a table, nor are the teeth particularly hard wearing. Still, an opener like this would definitely make an interesting talking point and, if nothing else, a nifty desk accessory. 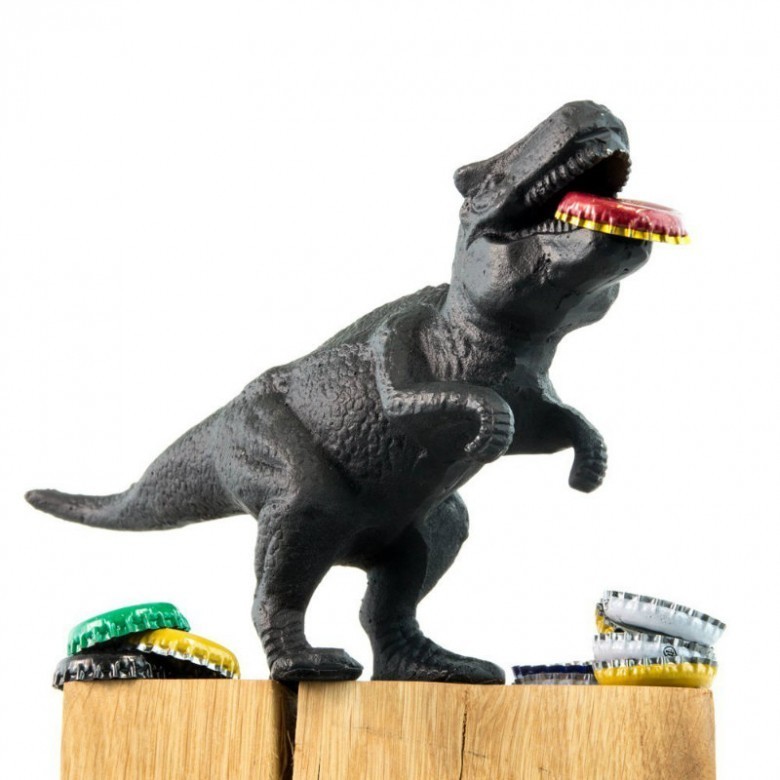 Luchador bottle opener: open your beer with a choke hold!

What is a luchador? Well, imagine a mix between a WWE wrestler, an acrobat and a bank robber who insists on wearing a fabulous face mask.

The Luchador Bottle Opener does its job perfectly, which is a big plus when compared to other novelty items. It is actually made with stainless steel and a rubberised coating, so you will not have to worry about it being too flimsy to actually open anything.

Amazon reviewer JJJ was particularly happy that this product lets you have “a strange little fellow lurking in your cutlery drawer. Nice.”

That’s… certainly a plus, we suppose? I’d certainly feel better knowing my cutlery is protected by a tiny Mexican wrestler. 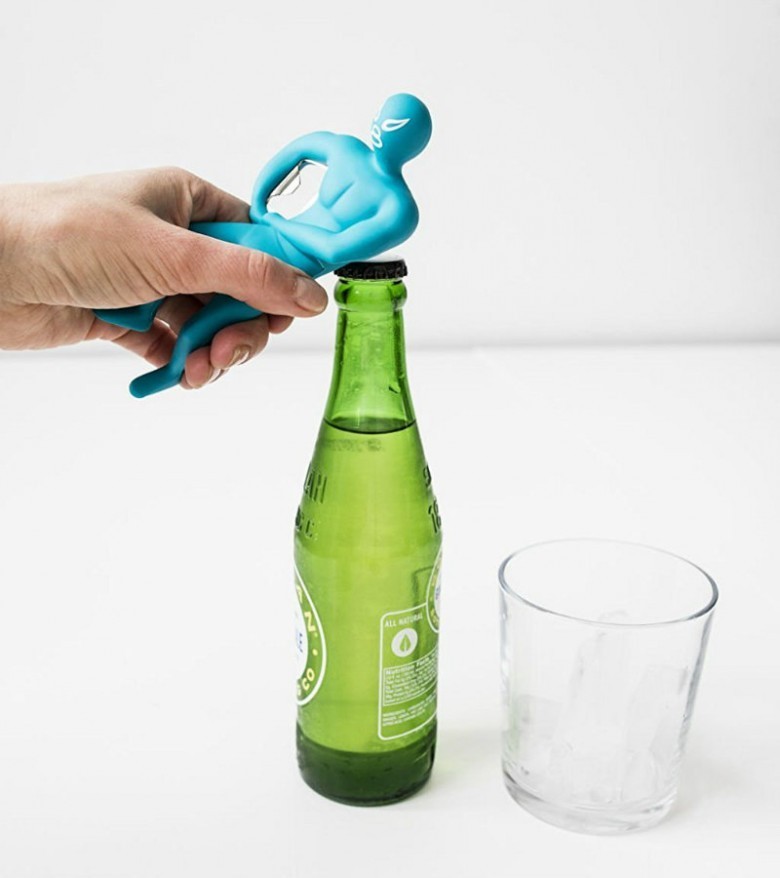 Boba Fett bottle opener: open your beer (with no disintegrations)

Have you ever wondered why Boba Fett, the galaxy’s most fearsome bounty hunter, went out like a complete numpty in Episode 6? Well, if he already had his own range of beer bottle openers by that point, we might be able to make an educated guess.

The design of the Boba Fett Bottle Opener is almost as cool as the iconic character. It has its own magnet for easy storage (MAGNETS MAKE EVERYTHING COOLER) and is made of sturdy ‘solid metal’ (presumably the same stuff they used on the Death Star).

The opener is solid and heavy enough to make it easy to use, though a few customers have had bad experiences because of its size. Still, if you are a Star Wars fan looking for a great new accessory, a bottle opener based on everyone’s favourite b-list character could be exactly what you need! 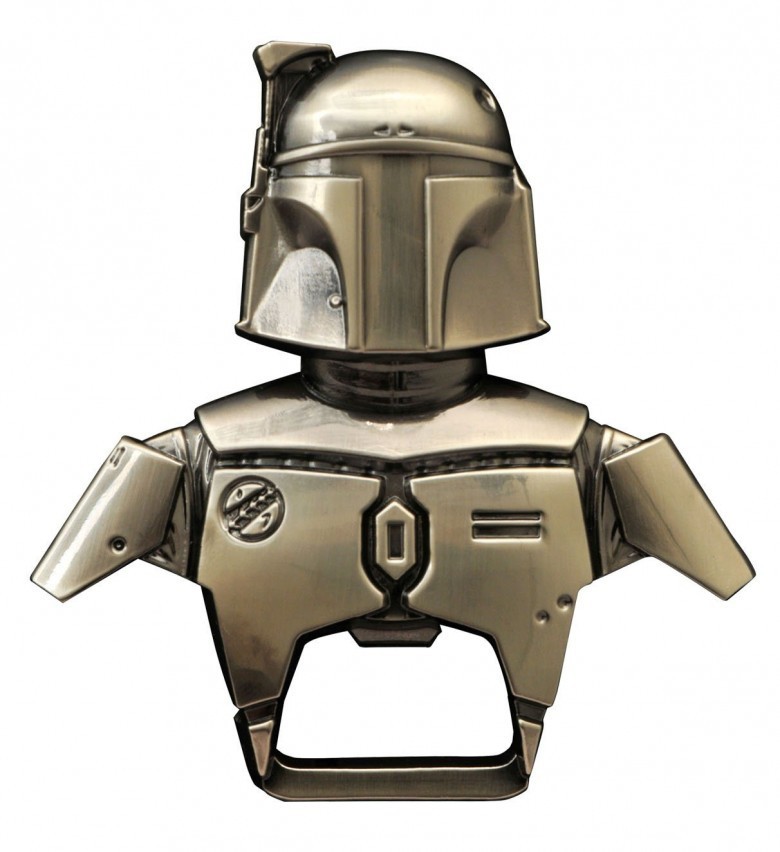